In the past, whenever someone mentioned Madagascar to me, I immediately thought of a scene from Pixar’s animated movie “Madagascar” where King Julian and a tribe of fur balls were signing “I like to move it, move it…”. I can imagine that this scene and song is stuck in your head at this moment.

However, Madagascar, the actual island country that I stepped onto in July 2017 is something entirely different from any other place I have ever seen. Madagascar is the fourth largest island in the world, located off the eastern coast of Mozambique, and it was created when Africa broke off from the southern supercontinent Gondwana around 165 million years ago. Landmasses eroding from Gondwana, except Madagascar, include Antarctica, South America, Africa, Australia – New Guinea and New Zealand.

About 75% of species found on this island are in fact not to be found anywhere else on the planet. One of the species that I could not wait to see was the lemurs. I admit that King Julian from “Madagascar” had influenced my preferences in what animals I wanted to see on the island first.

There are over 100 kinds of lemurs on the island, and around 70% of these are already 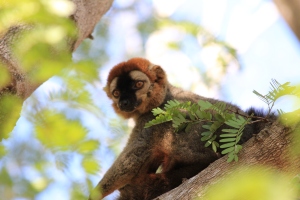 endangered species. The word “lemur” comes from the word “lemurs” that means “ghost” or “spirit” in the Roman mythology. The word referred to frightening spirits of the dead who hunted people during the night. Malagasy people had believed that lemurs were such ghosts. These believed had been supported by the behaviour of these creatures; many of them are nocturnal and make strange sounds.

Lemurs share the basic resemblance with basal primates. However, the common misconception is that they gave rise to monkeys and apes. Actually, lemurs evolved independently. Due to the climate of Madagascar, the evolution of these animals has resulted in such a diversity that nowadays the rival any other primate group in diversity. Over 2 000 years ago, when the first humans had come to the island, there were lemurs as large as gorillas. Today, their size ranges from 30 grams to 9 kilos.

There is also a common grouping of lemurs based on the time of their activity: day or night. The nocturnal lemurs are smaller and more reclusive then their diurnal alikes.

Lemurs are vocal animals, making sounds that range from grunts of Brown Lemurs, to the chirps of Mouse Lemur to the roaring of Indri, that is a noise something between a song of a whale and an ambulance siren.

Unfortunately, during my trip to this magnificent island, I did not manage to convey my greetings to King Julian aka Ring-Tailed Lemur, but I spotted few other kinds, and you can find these described below.

The one that you hear first upon entering the forest is the Indri. It is the largest living lemur, weighing even up to 9 kilos, and it is native to Madagascar. The Indri is well-known for its loud and very distinctive songs. These can last from few seconds to even 3 minutes at a time, and there are three phases of the each “performance”. All members of small groups participate in roaring, except the youngest members of the group. As these roars are very loud, we heard them from few kilometres away, and they fill the air with different invocations. The interesting characteristic of indri is that when they start to sing, you can spot the inside of their mouth, which is red. It is a nice contrast to their white and black coat. The immediate thing that I caught through my lens, were their ears; very teddy-bear like.

Indri are also called “babakoto”, and they live monogamously in small family groups. They are purely herbivorous, feeding on leaves, seeds, fruits and also flowers. The main threats to this species are destruction of their habitat due to slash and burn style agriculture, collecting the wood for fuel, and logging. Despite the local taboos, it is also hunted. Indri’s conservation status is critically endangered.

The most beautiful species of lemur, is Diademed Sifaka. This longest living sifaka has a long

and silky black and white coat, with yellowish coat covering its arms and legs. The head has a distinctive silver “crown’ or “diadem”. They can be spotted sharing their territory with other species like Red-bellied Lemurs or Common Brown Lemur, but Diademed Sifakas are known to defend strongly their own areas even against the other members of the same species. For a large sifaka, Diademed Sifaka is quite athletic and is able to leap from tree to tree with a speed up to 30 kilometres per hour. This made very difficult to capture them on the camera, so at some point I put it down, and watched them mesmerized. They leaped from tree to tree with such ease and grace.

Sifakas are medium-sized creatures, weighting up to 6 kilos, with a characteristic “shi-fak” alarm call. They are skillful climbers and jumpers, and are able to leap up to 10 meters from one tree to the next. Sifakas are herbivores, eating mainly leaves, flowers and fruits. Sifakas are also quite good dancers, making moves on the sand that are cross between children jumping and ballerina dancing.

All species of sifakas are threatened, ranging from vulnerable to critically endangered.

We were lucky to spot another kind of a sifaka, Coquere’s Sifaka. They spend their time on the small areas, with ranges sometimes overlapping with other groups of sifakas. Yet, they avoid each other due to possible aggression. Interesting fact is that when Coquere’s Sifakas meet, they greet one another by rubbing their noses together.

As relatively rare as it is in the animal world, the matriarchal order is very common amongst the lemurs. A system based on the female being dominant over males is especially pronounced amongst Coquere’s Sifakas. When a female looks for food while the male is waiting behind her and it happens that male gets in the way, the female may smack or bite him.

Then he shows the submissive behaviour by rolling his tail, and moving out of her way. The other species I managed to capture on my camera was Red-Fronted Lemur. This lemur lives primarily on the western coast of Madagascar, and likes the dry lowland forests. It has a grey coat with a black line from forehead to the nose, and white eyebrow patches. The one I managed to spot, had a lovely red hairline.

highland rainforest, evergreen moist forest and dry forests. They spend almost all the time on the trees, and may come down to the ground for very short periods time. As the name “common” implies, we saw many families spread across the trees. Many of the group members were busy doing one thing, sleeping in funny poses with legs and arms hanging from the branches.

Their short and dense fur is brown or grey-brown. It is little smaller then Red-fronted Lemur, and weights up to 3 kilos. They tend to be quite active during the day, however they may keep being active into the night, especially during full moon. 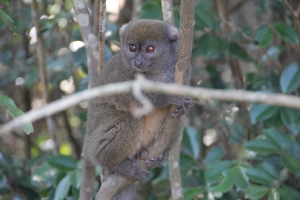 Once thought extent, Bamboo Lemurs, are gentle and rather shy creatures. Their short coat is silver or silver-brown, and they have beautiful amber-brown eyes. As the name implies, Bamboo Lemurs prefer the territories where bamboo grows. Similarly, to the previously described Common Brown Lemurs, these shy creatures tend to spend most of the time on the branches of the trees, and only spending short time on the ground.

We met four of these curiously looking furry lemurs on a small island turned into a lemur sanctuary. One was starring at us with its big eyes from behind the tree.

The main predator hunting lemurs is Fossa, a cat-like mammal endemic to Madagascar. A classification of this carnivorous animal is rather controversial. Its physical traits are similar to a cat, but there are traits that are also in common with viverrids. Generally, Fossa is being feared and protected by locals due to their taboo, “fady”. The taboos are believed to be enforced by supernatural powers, that are connected to Malagasy worship of ancestors. This predator has traditionally been hated and feared as a dangerous animal, known for hunting piglets and fowls, and even believed to “take little children who walk alone into the forest”.

Fossa is the largest mammal carnivore on Madagascar, and males are usually larger than

females, weighting up to nearly 9 kilos. They are found in forests and hunt actively during a day and a night (cathemeral). Their diet, in over 50%, consist of lemurs, but also tenrecs, lizards, birds and other animals. The one we met was rather keen on trying some canned fish from park ranges during their lunch. It looks like it was not the first time this particular creature sniffed some sardines in oil, and had had a taste of it in the past.

Madagascar is truly unique. I could not help but wonder what it is there more for me to experience on this glorious island, and what more it is there to take my breath away.

But you have to wait for another post to find out.