13,5 hours. That is the duration of a direct flight from Istanbul to Havana with Turkish Airlines. 13,5

hours of twisting and turning, half watching the same movies on the entertainment system, and squeezing my nose to the window to experience the lights of the islands thousands of meters below as the sunrise explodes with the light and many Caribbean islands spread across the turquoise ocean. I still could not believe that I was about to land in Cuba.

Everyone has the “I have to see” location, city, site, etc. For me, Cuba was always this special place for me. It must have been its rich and complicated history, vintage cars, nature, and its smiley people. It had taken few years to finally pack The Other Me, get the entrance visas called tarjeta de turista. Then what was left to be done was to spend 13,5 hours on the plane.

Havana was exactly what I had expected, and the same time it was nothing what I had expected. The city is very lively at any hour of the day or night, and heavy wind and salt from the ocean filled the air. There are tourists flooding almost every corner of the city. I noticed almost every nation squeezed in the tourist buses, with groups mainly from USA, Germany, and to my surprise, Poland.

Just about on every corner there is an American vintage car from the 1950s. Those drivers who are mainly targeting curious tourists, tend to take meticulously good care of their cars. And these car shine! They are clean both from the outside and from the inside. The ride with these cars is not a cheap affair, however. The gullible tourist has to cough up between 20 to 50 CUC (Cuban Convertible Peso is one of two official currencies in Cuba; CUP is for mainly accessible for locals and it is not widely used by foreigners; CUC is for mainly used by tourists and it is pegged to USD, which translates to almost 18 – 45 EUR for a 1-2 hour ride. Well, I had to experience this too, especially that it was my birthday, and I wanted to celebrate it properly.

Then there are Lada cars from 60s and 70s, owing to formerly close Cuba – Soviet Union relations. These taxis are used mainly by locals, and they cramp into these cars as many people as possible to make the ride cheaper. The Other Me and I wanted to experience more of a local mode of transportation, and we managed to get ourselves into one of these Lada cars on the way to a house of Hemingway, located outside of Havana. It was an experience that my lower back remembered for few days. But this was Cuba, and I was taking it all in!

The major part of the trip was of course, cigars. I must admit, I had tried once or twice to attempt to smoke a cigar before. However, I had always failed miserably. The Other Me, on the other hand, is a cigar lover. We had a list of locations in Havana where cigars were officially sold and where cigar aficionados gathered to have a smoke and rum. If one wants to buy cigars there, one must keep to official stores located in former cigar factories or Casa de la Havana stores in major hotels. There are, unfortunately, rather questionable and fake cigars being sold and they have nothing in common with the actual cigars. Some of those less “official” cigars may have been rolled out of banana leaves, and they simply can make one very sick. Besides, if one is stopped at the Customs with some shady cigars, one can end up with rather hefty fine.

Coming back to cigars: We first visited the tobacco plantations in Vinales Valley in the province of Pinal del Rio, located at the western end of the island. The landscape with fertile soil, and appropriate climate makes this province the most suited to grow tobacco plants for rolling cigars in the world. The Cuban tobacco is considered the best and is therefore in great demand everywhere in the world. Tobacco growing is a result of experience and expertise handed from one generation to the next.

We made a small “cigar trail” trail in Havana, going from a location to location, chosen based on the history connected to it and advice given to us. We started from the famous landmark location Hotel Nacional de Cuba. The hotel was opened in the 1930 and hosted (pre-revolution) famous names such as Nat King Cole, Frank Sinatra, Josephine Baker, Eartha Kitt, and, of course, Meyer Lansky. Now it is crowded by European and American tourists trying to look professional and rather self-important while puffing Cuban cigars.

The next locations on our “cigar” trail in Havana Vedado were Havana Libre Hotel and Melia Cohiba Hotel. Every hotel cigar store has a resident roller. You can ask questions (I put my Spanish to the test:)) and they will explain what tobacco leaves are used as a filler, binder and a wrapper and entertain the visitors with cigar related stories, all awhile continuing to demonstrate their rolling skills. My favourite roller was a lovely lady Juanita, a resident roller in Melia Cohiba Hotel. She had not only been rolling cigars for over 4 decades, but had rolled cigars for Fidel Castro, his favourite Partagas. Usually the VIP hotel rollers are former top factory rollers, and they were chosen for these high-profile jobs.

We also visited two cigar factories in the city, La Corona and Partagas, where the selection of leaves for each part of the cigars, rolling, and quality checking of each rolled cigar is done manually, as there are virtually no machines used. You will not be able to find any part of automated process in any room. Everything is done by the hands of factory employees. When we entered the rooms for specific section of cigar “production”, it felt like the time had stopped in the 1800s. I expected to see all or at least majority of the employees smoking cigars while they were working, but to my surprised, some of them smoked cigarettes.

The jewel in the crown and the top place for The Other Me was Hotel Conde De Villanueva in Havana Vieja. It is a perfect place for cigar fanatics; small and cosy hotel with a cigar store and Reynaldo, a master roller who is also a manager of the store. We went there twice. First time, we went there to see the place and have a puff. In practice, The Other Me had a good pre-dinner cigar, and I was trying to work through a small cigarillo. The purpose of the second visit was to buy house cigars for home.

What took me by surprise was an absence of any type of commercials of printed advertisements, whether in the city or outside Havana. I am used to flashy ads with Coca Cola, the newest version of Audi or the latest skinny supermodel with photo-shopped white teeth on a toothpaste commercial stretching her lips in a fake smile. But this was not the case in Cuba.

Instead, there are posters and billboards with faces of Che Guevera, Fidel Castro and Camilo Cienfuegos.

These boards are everywhere in Cuba; walls in the cities, on the corners of streets, at the entrances and exits to towns, and everywhere else where it can be visible. There are slogans from the Revolution and post-revolution era in Cuba praising what had been done since 1959, the leaders of Revolution, and “the power in its people”. For locals, these boards are part of their daily life. It was rather an experience to be looking at three bearded men, presented together or separately on the poster or the board everywhere. It is worth mentioning here that there are also faces of Hugo Chavez and Nicolas Maduro lurking from big boards, showing the support and ties between Cuba and Venezuela.

Outside of Havana, the true nature of decades of embargo, closed economy, and no support to local farms, is in plain sight. There kilometres of empty plots of land, without anyone taking care of the lands, and without any grains or plants growing there. This is one of the riches and very fertile soil in the world, and lots of it is simply not cultivated. Even, where there is agriculture, 80-90% of the results of cultivation (e.g. tobacco leaves, vegetables, fruits, etc.) is given to the government. All in the name of the “triumph of the revolution”.

The six-lane motorway is in a very good condition, because it survived decades of no traffic. There were hours during our drive from Trinidad to Havana, when our car was the only one on the road.

Another part that was surprising is the food. Cuba is not a place for culinary adventures. I had known this before the trip, but the reality was even harsher. For someone who is not a fan of meat or chicken, dining in Havana can be quite a challenge. Years of embargo are not only visible in daily life but also in lack of grocery shops and lack of certain basic products, even those that are locally produced.

The fish is not locally “fished” simply because there are no fishing boats (they were sold out decades ago) and there is no fishing industry. The Havana Vieja (The Old Havana) offers a range of restaurants mainly for tourists with international food like pizzas or pastas, or dishes that do not offer much for pallets curious to taste local Cuban cuisine at rather European prices. Having said that, we had found a nice restaurant in Havana Vieja with very good Cuban style black beans. The place is called Paladar Los Mercaderes. There is another one place worth mentioning to try the fish, namely El Gato Tuerto in Havana Vedado, nearby the Hotel Nacional de Cuba. 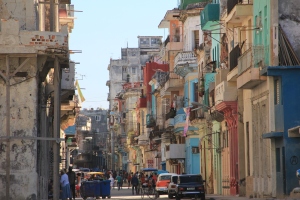 And the last but not least, mojitos! You cannot come to Cuba, and not taste a mojito, at least one. I did try a few mojitos and in different location. But I have to agree with Ernest Hemingway: He had his mojitos at La Bodegita del Medio in Havana Vieja. Although almost any bar promotes it mojitos as “the best in town”, but La Bodegita has the best mojitos in town!

With the smokes and all the smokescreens in shape of reminiscing the “triunfo de la revolucion” (translation of “triumph of the revolution”), I saw and experienced in Cuba, I find the place fascinating. One can see changes, very slow changes, coming to the island and its people. The country is opening to the rest of the world in a pace of a walking turtle, but I was glad to see that after decades of embargo, the changes are happening. I saw Cuba for the tourists, with shiny vintage cars, souvenir shops, and boxes of cigars. I also saw the Cuba through the eyes of its inhabitants; the poverty, decaying buildings, poverty stricken life in between the staircases and empty shelves in the shops.

But would I ever come back to Cuba? Absolutely!